A report accusing China of power of British attacks on India’s grid has been attributed to a cyber-security firm named Inikt Group, by the website, The Register.

But no such firm exists; Insikt Group is a part of the threat intelligence firm Recorded Future which has been funded in part by the CIA’s investment arm, In-Q-Tel. The report in question is here.

I pointed this out in the comments section for the article — after first identifying myself as a technology journalist and elaborating on why I was making the comment — and left my comment there.

A while later, I found that the comment had been deleted. That was two days ago and it looks like The Register wants to hide the fact that it was pushing a report from a CIA-sponsored unit.

Or perhaps it did not want to have mud on the face of its reporter, Laura Dobberstein. 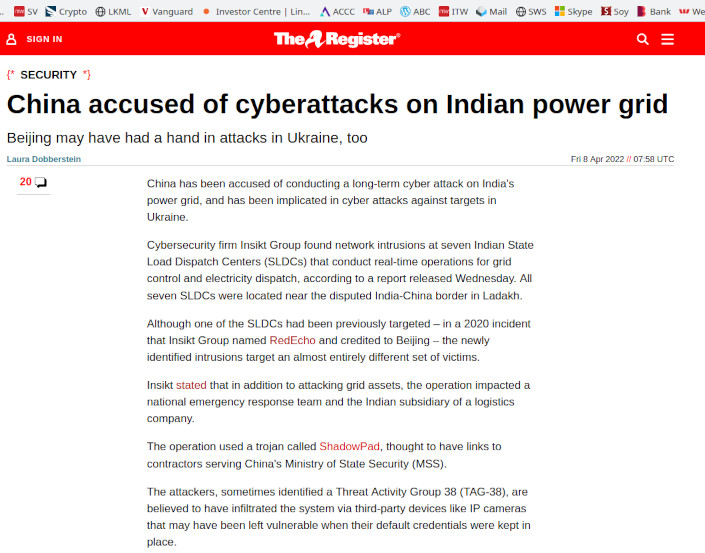 The Register report in question.

I rarely comment on the articles put up by other technology, and when I always do, I identify myself. I did this once with the American website, Ars Technicabut the editors there demonstrated a more civilized approach than The Register.

This is the second time that Recorded Future is making this claim; the first time was in 2021. However, at that time the claim was extremely tenuous; as I wrote: “Recorded Future takes more than one step backward, citing characteristics of other China-related groups (related? linked?) before saying: ‘Despite some overlaps with previous groups, Insikt Group [the fancy name for its research wing] does not currently believe there is enough evidence to firmly attribute the activity in this particular campaign to an existing public group and therefore continues to track it as a closely related but distinct activity group, RedEcho’.”

The “research” that Recorded Future publishes seems a little too cute at times. Just before the summit of the Koreas in 2018, the company published a blog post about North Korean activities in cyber space.

Another report, issued just before the former US president Donald Trump was due to pronounce on the Iran nuclear deal — he canceled it — claimed attacks that Iran would retaliate by stepping up its online. Nothing of the sort happened.

Both the North Korean attack report and the Iran one were sent to iTWire prior to publication; we ran the former, but then I thought the second one looked just too much of a coincidence. So I held off.

The Register has long thrived on a reputation for being upfront in its reporting. But after this incident, and this one too, one is inclined to take that claim with a pinch of salt. Or maybe a whole kilo.

The past year has seen a meteoric rise in ransomware incidents worldwide.

Over the past 12 months, SonicWall Capture Labs threat researchers have diligently tracked the meteoric rise in cyberattacks, as well as trends and activity across all threat vectors, including:

These exclusive findings are now available via the 2022 SonicWall Cyber ​​Threat Report, which ensures SMBs, government agencies, enterprises and other organizations have the actionable intelligence needed to combat the rising tide of cybercrime threat.

PROMOTE YOUR WEBINAR ON ITWIRE

It’s all about Webinars.

If you wish to promote a Webinar we recommend at least a 3 to 4 week campaign prior to your event.

The iTWire campaign will include extensive adverts on our News Site itwire.com and prominent Newsletter promotion https://itwire.com/itwire-update.html and Promotional News & Editorial. Plus a video interview of the key speaker on iTWire TV https://www.youtube.com/c/iTWireTV/videos which will be used in Promotional Posts on the iTWire Home Page.

Now we are coming out of Lockdown iTWire will be focused to assisting with your webinars and campaigns and assistance via part payments and extended terms, a Webinar Business Booster Pack and other supportive programs. We can also create your adverts and written content plus coordinate your video interview.

We look forward to discussing your campaign goals with you. Please click the button below.