A new report reveals how attackers think, what they value, and how they apply the most pressure on victims. The report released today by Rapid7 investigates the trend, pioneered by the Maze ransomware group, of double extortion, examining the contents of initial data disclosures intended to coerce victims to pay ransoms.

Titled “Ransomware Data Disclosure Trends”, it reveals a story on how ransomware attackers think, what they value, and how they approach applying the most pressure on victims to get them to pay, providing insights on the data threat actors prefer to collect and release .

With access to a network and holding that data for ransom, ransomware is now one of the most pressing and diabolical threats faced by cybersecurity teams. Causing billions in losses across nearly every industry around the world, it has stopped critical infrastructure like healthcare services in its tracks, putting the lives and livelihoods of many at risk.

In recent years, threat actors have upped the ante by using “double extortion” as a way to inflict maximum pain on an organisation.Through this method, not only are threat actors holding data hostage for money, but they also threaten to release that data (either publicly or for sale on dark web outlets) to extract even more money from companies.

In a first-of-its-kind analysis using proprietary data collection tools to analyze the disclosure layer of double-extortion ransomware attacks, Rapid7 has identified the types of data attackers initially disclosed to coerce victims into paying ransoms, determining trends across industry. Australia was positioned eighth in the rankings for distribution of ransomware incidents in the top 12 countries.

In the healthcare and pharmaceutical sectors, internal financial data was leaked some 71% of the time, more than any other industry. Customer/patient data also appeared with high frequency, having been released in 58% of disclosures from the combined sectors.

The state of ransomware actors

One of the more interesting results of the analysis was a clearer understanding of the state of ransomware threat actors. It’s always critical to know your enemy, and with this analysis, we can pinpoint the evolution of ransomware groups, what data the individual groups value for initial disclosures, and their prevalence in the market.

For instance, between April and December 2020, the now-defunct Maze ransomware group was responsible for 30%. This “market share” was only slightly lower than that of the next two most prevalent groups combined (REvil/Sodinokibi at 19% and Conti at 14%). take its place. Conti and REvil/Sodinokibi swapped places respectively (19% and 15%), barely making up for the shortfall left by Maze. lesser-known groups being responsible for the rest. 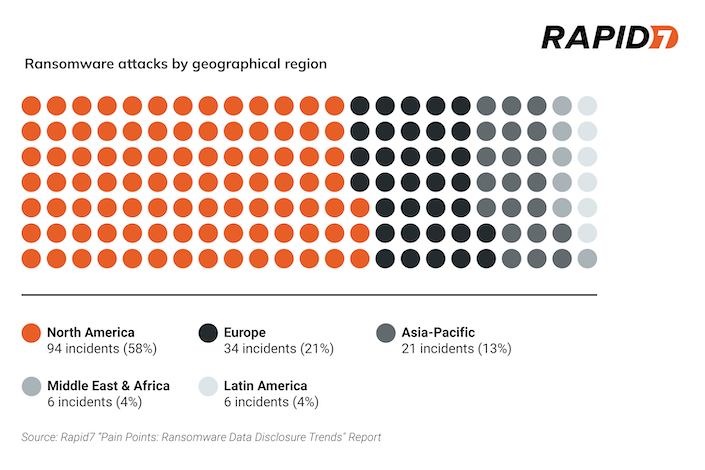 While there is no silver bullet to the ransomware problem, there are silver linings in the form of best practices that can help protect against ransomware threat actors and minimise the damage, should they strike. This report offers several that are aimed around double extortion, including:

To get more insights and view some (well redacted) real-world examples of data breaches, the full paper is available here.