Reading this Crusader Kings III review, you’re likely to be one of two people: either you’re a fan from the PC version interested in seeing how it holds up on Microsoft and Sony’s platforms, or you’re someone new to the wonderful world of Paradox grand strategy and the console release of CKIII has finally pushed you over the edge. In both cases, I say unto the: everything’s good, but there are some things to keep in mind.

Crusader Kings III is not like other strategy games that you’ll find on consoles. Its closest relative is Stellaris: Console Edition – which is itself another PC port from the same studio – and between the two they will challenge your expectations, and provide a fun distraction filled with in-depth strategy, RPG-like drama, and some light empire management.

From the newcomer and predominantly console gamer perspective, the main challenge you may have is that Paradox’s take on real-time strategy games isn’t as kinetic as other games in this genre. You won’t be wow’d by mass action sequences or an intense predetermined story. Instead you become the master of your own mediaeval world, taking control of a dynasty and living through the twists and turns of court life across several hundred years of history. These could be plots and schemes you enact yourself, or reactions to the living society that surrounds you.

Unlike most strategy games, Crusader Kings III puts you in charge of a single character. This could be a semi-historical figure from one of the game’s many start dates, although there are plenty of made-up dramatis persona as well as this game has thousands of individual characters all living out the life they want to lead.

Your character will be part of a dynasty – or a house – and you will have relatives. Children, siblings, distant cousins… your goal as the player is to further your bloodline and bring glory to the house, although this is predominantly done through the lens of seeking personal glory for the character being played. There are no official win states, and only one true failure – if, when your character dies, there is no-one left within your immediate bloodline to take control of, your dynasty becomes extinct and you ‘lose’ the game.

Your characters can be as low as counts, or as high as kings, queens, and emperors, and a typical goal sees you trying to secure more and more land, wealth, and prestige for your family. There are plenty of historical and fantastical Kingdoms and Empires you can try and ascend to. You’ll need to ensure you make good marriages, engage in diplomacy, intrigue, and, when necessary, wage war.

This is all old hat for anyone who’s been playing the PC version this past year, but for newcomers it’s worth going over the basics. For both crowds, it’s alo important to understand how CKIII expects you to interact with its world using a gamepad instead of a mouse. You can imagine the difficulties of converting something to a console that relies on a mouse-pointer interface, but I was pleasantly surprised how well the development team has risen to the challenge.

The UI is as minimalist as it can be

Crusader Kings III is already a new chapter in Paradox’s on-going effort to lessen the amount of data on a screen and let the visuals take center stage, and that philosophy has carried through to the console edition. The UI is as minimalist as it can be, with the main information areas relegated to the top and bottom of the screen. There is only one default floating UI element, which represents the character you’re currently playing.

Accessing information is clearly marked – you can enter submenus such as realm and army management, your council, and schemes and major decisions by using the triggers on a gamepad. Your personal character menu can be brought up with the tap of a button, and navigating the game map and tapping A on any Coat of Arms will bring up other characters. If you want to inspect buildings and settlements instead, there’s a secondary button for that, and this can also bring up secondary action menus as well in other areas.

Perhaps the only thing that hasn’t translated well is Paradox’s tooltip innovations. Most of the top level information you need to know has been grouped into sections that you can access in bulk with a single tap, and tooltip information will expand on the options in front of you (although sometimes this feature can bug out and stop working) for key decisions. 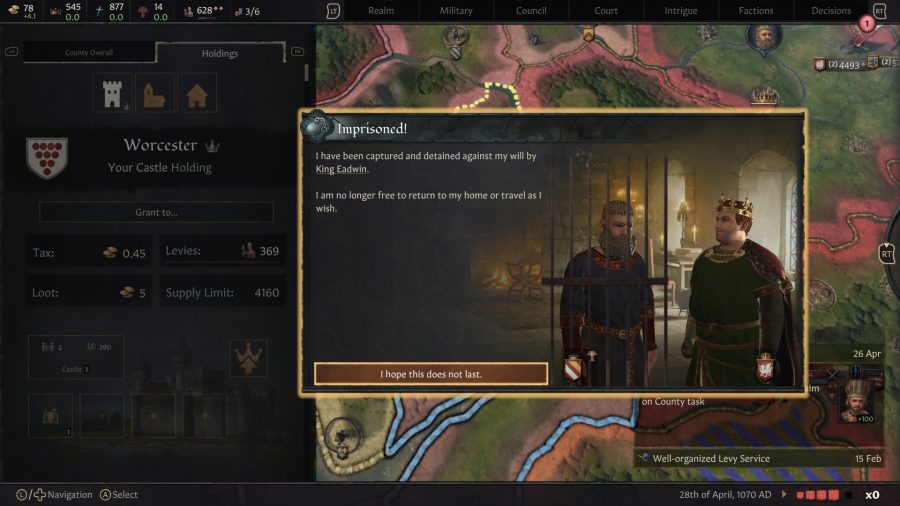 Unfortunately, for CKIII Paradox invented a tooltip within tooltips functionality which is about the only fiddly bit of the game. Holding down the left stick will bring up a secondary mouse pointer that doesn’t move the map, but lets you inspect whatever element of the game you wish in a way similar to what you’d do on PC. It’s only through this interface that you can find out what certain types of things do, but thankfully these represent some of the least-important bits of information. Still, it’s a pain whenever you do want to know something.

The UX is half the battle with a game like Crusader Kings III – provided you acclimatise yourself (the tutorial is thorough, if a bit wordy and rail-roaded), the rest of your time should be a breeze. The main trials of CKIII are mental – you are in this for the long haul, and while it’s certainly possible to take a character from rags to riches within a single lifespan, those gains may not survive your succession. Your game will be as entertaining as your imagination can make it, but sometimes it can be figuring out the ‘how’ that can lead to puzzlement and frustration – something that the console version can’t escape from either.

The console editions launches with an earlier version of the PC game. Crusader Kings III is currently on patch 1.5 with a couple of expansions under its belt, but the console build is currently comparable with the game’s 1.0 version, back when it launched at the end of 2020. There are plenty of updates missing, but all this means is that it will come further down the line – Stellaris’ console version followed a similar journey.

On top of that there are several features the console version has that the PC version does not. An automated AI army system for example will let you put your arms completely in the hands of an AI to wage wars for you, letting you fully embrace the role-playing aspect and submit yourself to the tides of fate. There are other options as well that will help you remain entertained, if you’re struggling.

If you’re getting bored with your current dynasty or even section of your dynasty, you can also switch characters from the main menu. Choosing who to pick at the start of the game doesn’t seem like such a tense choice, because if you’re not finding it as fun as you thought you might there’s not an easy-to-use out.

Ultimately, this is a perfectly decent port of a perfectly decent strategy game. I’ve encountered bugs – including one crash bug – but provided you’ve got the auto-save set to a regular cadence you’re unlikely to have missed out much. Hell, you might even get a better result upon reload, as the game state is always in flux from the moment you unpause.

The fact that it’s using an older version of the codebase may disappoint some PC fans, but all it really means for newcomers is that there are more interesting features and updates on the horizon. If you’re willing to broaden your horizons and challenge yourself in terms of what you can enjoy on an Xbox or Playstation – along with a healthy appreciation for mediaeval drama – then Crusader Kings III is well worth checking out.