This time of year, it’s long been something of a clarion call among truckers to their fellow drivers to work together to help prevent the kinds of pileups seen in recent weeks for instance on I-35W in Fort Worth, Texas; in Iowa on I-80; and other. While truckers could’t control the behavior of the four-wheelers around them, plenty of drivers note, better hive-mind situational awareness could play a big part in reducing the severity of wrecks. That awareness is often based on timely info sharing obtained via one particularly hyper-local communication tool most have on board the truck.

Yes, we’re talking the citizen’s band radio here. In today’s special-edition Overdrive Radio podcast, put together as part of Overdrive‘s 60th-anniversary installments every Monday, listen back to a round in our Audio Mailbag series that followed a deadly night on Eastbound I-80 in Pennsylvania in January 2017, when westbound trucker Scott Levan used his CB to warn EB drivers of traffic slowing near a broken-down semi on the shoulder.

“I was yelling on the radio … just before it took place telling you all to spread out because you have a broken-down semi on the shoulder and traffic is coming to a stop,” LeVan wrote in something of a message to his fellow drivers at the time. His CB warning got nary a response in the moment as he passed by. “Get with the program, drivers. There is no excuse for you not to have a CB.”

According to recent polling of Overdrive readers, though, just 8 percent of the readership runs entirely without a CB in the truck. Another 10% say they hardly ever use the one they have. Most reported daily CB use for a variety of purposes.

Among the “once in a while” respondents were a significant percentage of respondents (8 percent overall) who reported sharing road information but rarely hearing a response or reports from other drivers, perhaps more of decline in CB use. 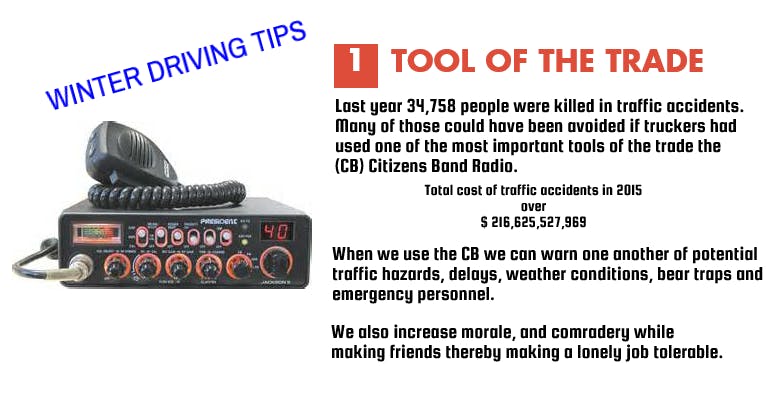 Then-owner-operator — and current Overdrive Extra blog contributor — Clifford Petersen included this graphic prominently in a larger infographic he created in 2017 to urge drivers to rely more closely on communication in difficult conditions with the CB tool. Take a look at his full infographic via this story from 2017.

Reader Kenneth Williams has noted he believes “the biggest difference from the old days and now with a CB is in the 1970s there were fewer trucks on the road. And no way to just call for help if you needed help. Even pay phones were only in towns. As a trucker you were on your own, except for other truck drivers. So you made a lot of friends on the road.”

It’s certainly true that over the course of Overdrive‘s six decades in existence, the CB has been much more in trucking than just an on-highway safety tool. There’s a reason so many owner-operators in the first decade of this century took to calling it the “original social media” amid the rise of online social networks. That phrase has since been memorialized in a scholarly work covered in Overdrive in 2019 — “Crashed the Gate Doing Ninety-Eight,” by Columbia, Missouri-based academic Tim Scherrer. The book tells the tale of the glory days of the Citizen’s Band radio as something more than the tool of the truck-driving community that it continues to be for many to this day.

It’s been and remains in some respects an integral part of the culture of the highway, from the days of impromptu meet-ups at truck stops (“CB coffee breaks,” by some accounts) and other parking lot gatherings to real friendships forged over the airwaves. This tool mightily contributed to quality of life for many.

Read more in Overdrive’s weekly 60th-annversary series of lookbacks on trucking history, and that of the magazine itself, via this link.

We charted some of those cultural aspects of the radio with its 1960s/’70s rise in the first episode in the Channel One-Nine series attendant to Overdrive‘s 2020 Over the Road podcast coproduction with PRX’s Radiotopia. In this 60th-anniversary special edition, run back through the CB’s history in brief with 2009 Overdrive Trucker of the Year Mike “Mustang” Crawford.

Along the way, Crawford tells the story of how he got his CB handle. (According to Crawford, like a good nickname, a CB handle meant to last is rarely something you give yourself.) It involves a wild horse named “Norman” from his days on a Colorado ranch decades ago.

As for the present, too many seem to think that the CB is little more than a “prop from a silly movie from the 1970s,” Williams added. For the sake of safety, for camaraderie among drivers, among other things, he said, “truckers need to take back your lives and get rid of the negative talk on the CB. And when you stop at the truck stop, go meet your fellow drivers and make friends. I will see you out there.”