An Apple gaming console idea is rumored to be currently being considered by the folks at the Cupertino-based tech giant.

(Photo: Stephen Lam/ Getty Images)
SAN FRANCISCO, CA – SEPTEMBER 9: An Apple Tv set-top box is seen in the demo area after an Apple special event at Bill Graham Civic Auditorium on September 9, 2015 in San Francisco, California. Apple Inc. unveiled the latest iterations of its smart phone, the 6S and 6S Plus, an update to its Apple TV set-top box as well as announcing the new iPad Pro.

As per a news story by Pocket Lint, a user from the South Korean forum website, Clien, claims to have close knowledge of the rumored gaming exploration of Apple.

The Clien posted said that there has been a leak from Taiwan, which revealed that Apple is already considering the thought of creating its own gaming device.

Apple is also rumored to have already conducted feasibility studies for this project.

On top of that, the user that claims to be close to the matter said that “we are discussing various methods” to transform the current Apple TV device, which sports a similar look to the Mac Mini and the all-new Mac Studio, into a gaming console.

What’s more, the leaker also claimed that the iPhone maker has already reached out to giant gaming firms like Ubisoft and Capcom.

On the other hand, Capcom is a Japanese game developer known for its iconic gaming titles, such as “Resident Evil,” “Street Fighter,” and “Marvel vs. Capcom.”

That said, if the rumor is to be believed, the giant gaming firms could bring massive exclusive titles to the future Apple gaming device.

However, it is to note that the rumor primarily came from a Korean forum website.

So, it would be best to take the latest report with a grain of salt as Apple, as well as Ubisoft and Capcom, has yet to confirm the gaming console project.

It is noting that Apple has previously been worth admitted that most of its revenues from the app marketplace, the App Store, primarily comes from gaming, accounting for a whopping $15.9 billion in 2021. 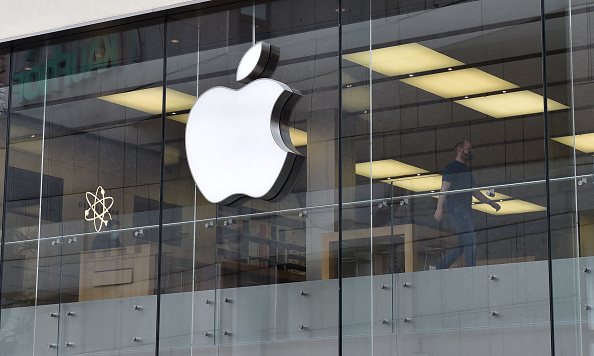 (Photo : CHRISTOF STACHE/AFP via Getty Images)
The logo of US tech giant Apple can be seen on an Apple store in Munich, southern Germany. – Apple said it planned to invest more than one billion euros ($1.2 billion) in Germany and open Europe’s largest research facility on mobile wireless semiconductors and software. The company said it would make Munich its “European Silicon Design Center”, creating hundreds of new jobs at a facility for 5G and wireless technologies.

The massive income of Apple from gaming apps outperforms that of revenue from gaming firms like Nintendo, Sony, Activision Blizzard, and Microsoft combined altogether.

Aside from that, according to a recent report by Mac Observer, Apple had previously attempted to enter the video gaming console market way back in 1996.

The iPhone maker has previously partnered with a gaming firm, Bandai, to debut its console known as Pippin.

Related Article: Apple Admits it Competes with Nintendo, PlayStation, Xbox as Most App Store Revenues are Gaming
This article is owned by Tech Times
Written by Teejay Boris